I would be the worst Catholic. Forgive me, Father, for I have sinned. It’s been 17 days since my last blog post. I have vague excuses – sporadic internet service on land and five days at sea with nothing but hopes and dreams keeping me tethered to reality, let alone the World Wide Web, but more on that later.

For now, let us reminisce about Porto Santo, a small island of great beauty, lovely people, delicious food and a peace and quiet that make me want to buy a little house and stay forever.

For those who like nerd stuff, here’s some trivia:

Porto Santo is part of the Madeira Archipelago, owned by Portugal, and lies about 575 nautical miles to the southwest of Gibraltar. (A nautical mile is about 1.15 land miles or 1.85 kilometres – I say “about” because it depends on your latitude, and yes, I am absolutely showing off my fancy new nautical knowledge. I will be an incorrigible know-it-all upon my return to Atlanta, more so than usual, spouting off terms and facts about sailing and the sea. Did I mention that I’m learning how to navigate? With charts and measurements and shit? Well. I am.)

It was first “discovered” in 1418 by Portuguese sailors, and Christopher Columbus, that famous discoverer of things that were not lost, lived here for a while, and one can visit his house. We did not. And that is all I will say about that. One important fact about the above photograph – the tiny island to the left? In the vertical middle of the photo? In the background? That is Ilhéu de Baixo. It is on the SOUTHERN tip of Porto Santo, NOT the northern as the Wikipedia page on Porto Santo would have you believe. I shall add “correct Wikipedia page on Porto Santo” to my never ending list of things to do. 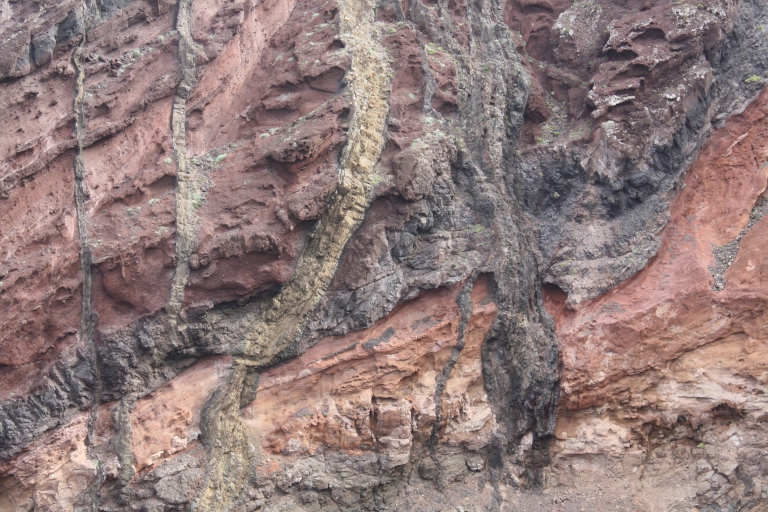 The island was formed by three different periods of volcanic activity, hence the amazing geology. And I get to share nerd-photos of cool-looking rocks. 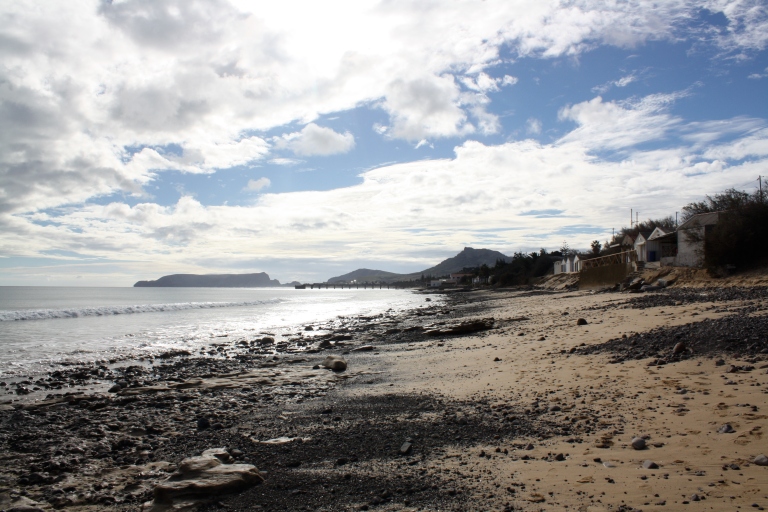 The tragedy of Porto Santo is the dramatic change in the economy over the past 30 to 40 years. Our amazing taxi driver/tour guide, Antonio, (not to be confused with our Portuguese first mate, Antonio), has lived on the island for all of his life – your guess is as good as mine as to how old the man is, but his knowledge of the history and geography of his home extends back decades. He remembers working on his father’s farm, tending to the sheep and goats, when Porto Santo had an independent economy based on agriculture. Virtually all of the hilly land that you see in the photos was terraced and planted or grazed by the animals, growing myriad crops from wheat to melons to grapes and producing milk and meat that sustained the islanders and was exported in large quantities to neighboring Madeira, about 30 miles to the southwest. Children only went to school for a few years, then grew up working on the family farm.

All of this changed towards the end of the 20th century when education regulations became more stringent and required all children to receive primary and secondary education. There was no high school on Porto Santo, so children were sent either to Madeira or Lisbon, on mainland Portugal, to finish their schooling. Huge numbers of these kids never returned, and agriculture declined. Today, the islanders rely entirely on tourism to sustain them – although tourist season only runs from April to October with very few flights from the mainland each day. In fact, from November 1st to April 30th there are no flights into Porto Santo – the island can only be reached by sailboat or by the ferry from Madeira – and most of the hotels close during this time. The large swathes of land between the main road and the beach are either for sale or have been bought up by developers, and the government has dictated that the land be used strictly for tourism.

Portuguese football star, Cristiano Ronaldo, Madeira’s native son, has property here, and the rumor is that he hopes to turn Porto Santo into the new Ibiza – a vision of the island’s future that makes me happy that I saw it before it descends into madness. Then again, I think Christopher Columbus was a tool, so what do I know?

And then there was this kitten that we discovered, (in a Columbus sort of way), at the almost-top of Pico do Castelo. And kittens make lots of things better.

2 thoughts on “Porto Santo, or How To Be The World’s Worst Travel Blogger”